In my graduate research, I seek to build upon current scholarship on partnered social dance and gender studies, a discourse that is changing among practitioners and one in which I am engaging directly as an active participant in international Zouk dance communities. In my thesis performance project I am deconstructing both the movement and culture of these communities and commenting on them by working interdisciplinarily, interactively and site specifically.

It Won't Buy You Lunch

It Won't Buy You Lunch is an evening-length work about artists embracing the part of themselves that has to make art in a world in which it doesn't make sense.  IWBYL is a collaboration between SSDP dancers (Stephanie Chun, Elisabeth Martin, Leigh Schanfein, Anna Schon), Open Music Ensemble musicians (Nicole DeVault, Kaveh Haghtalab, John Murchison, Jonathan Saraga; organized by Philip Foster), inventor-designer Robert Olsen, filmmaker Jaffe DeVault, lighting designer Tracy Wertheimer and costume designer Samantha Gebb.  Presented by The Tank at Standard Toykraft in Brooklyn, this three night run will be a perfect send off as Sydney closes the "post-bac in struggling artist" chapter of her career and heads off to pursue an MFA...  so make sure you don't miss it!
​
November 19, 20 and 21, 8pm at Standard Toykraft (722 Metropolitan Ave, Brooklyn)
Tickets $15 advance (http://m.bpt.me/event/2413563) and $18 at the door

After 6 long (but also very fast...) years, Sydney's taking a break (ish) from NYC.  Before leaving, she wanted to give you one last chance to catch some highlights from SSDP's major works, a peek into the new work she'll be developing in grad school as well as celebrate SSDP's incredible multimedia collaborators.
​
May 10, 8pm at Michael Ingbar Gallery (568 Broadway, NYC)
Stick around for the after party!
Tickets $10 suggested donation

Ask a Vane (xyz: chain creation at The Tank)

Ask a Vane is an investigation of transition with particular consideration of age and nature and is comprised of a series of improvised "chapters" driven by sets of tasks incorporating movement, music, text and a movable set piece.  This new collaboration with choreographer/dancer Katie Cowdery, award winning inventor-designer Robert Olsen and musicians from the Open Music Ensemble (organized by Philip Foster), will be presented as a 20 minute work as part of The Tank's xyz: chain creation winter cycle, a program that challenges nominated artists to create collaborative 20-40 minute works in 3 months.

Performance - February 26, 8pm at The Tank. $10 Tickets available at thetanknyc.org

Insomuch as the Dry Bones cast was totally exhausted, I figured I'd slap together an audience interactive solo reduction of the Dry Bones movement material for the National Choreography Month studio showcase.  It seemed to go over well with the producers and was selected to be presented at the NACHMO Gala on February 27!  I gave it a last send off as an alumni performer at the Joy Of Motion Dance Center Annual Gala (Washington, D.C.) on March 21 and packed up the American Apparel spandex, at least for now...

Imagined Architecture is a collaborative multidisciplinary work that takes a look at the stuff of which we, our city and the people with whom we share it are made.  It brings together Open Music Ensemble musicians Kaveh Haghtalab (kamancheh), Nicole DeVault (harp and voice) and Jonathan Saraga (trumpet), inventor-designer Robert Olsen, and NYFW ballerinas (gone rogue) Leigh Schanfein and Elisabeth Murray Martin to create something that will define the next chapter in SSDP's perpetual metamorphosis.
First work-in-process showing: Inception to Exhibition 2nd Annual Dance Festival
March 12, 8pm at Shetler Theater
Second WIP: Performance Studio Open House at Center for Performance Research
May 26, 8pm, RSVP on Facebook!

Spring 2014 Season (and premiere of the complete Dry Bones!) 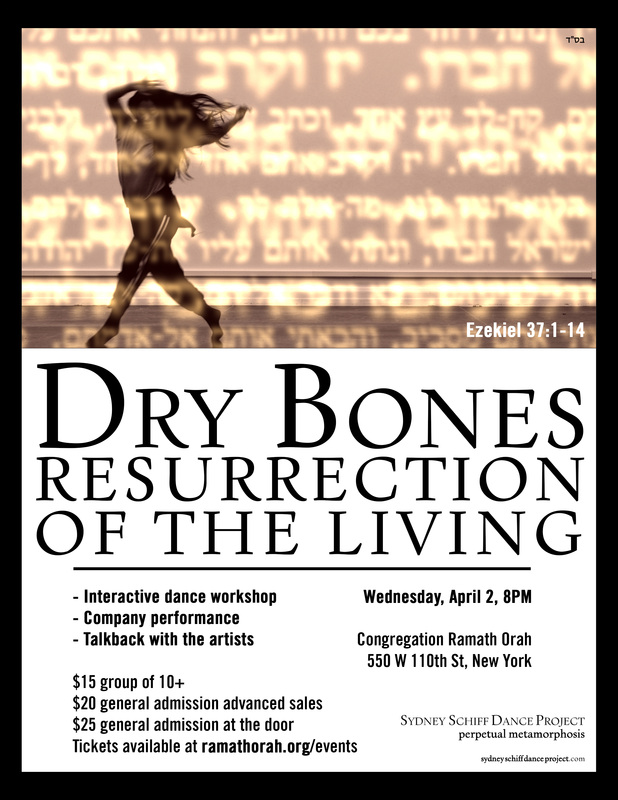 After our first preview at Drisha's End of Year Arts Fellows Showcase in June 2013 at the Manhattan JCC, we lined up a few teasers in preparation for the official NEW YORK PREMIERE of Dry Bones: Resurrection of the Living!

Take #1: The OFFICIAL PREMIERE of Dry Bones: Resurrection of the Living will be presented at Dixon Place as part of their Crossing Boundaries Series! - October 29, 7:30pm

And finally... Come celebrate the holidays and SIX MONTHS of performances at our Holiday Party/Benefit Performance on Thursday December 19!

Thank you to everyone who contributed to our fundraising campaign to support the development and production of Dry Bones!  With your support, we exceeded our goal, got the word out there and ensured Dry Bones will continue to grow after we previewed on June 13, 2013 at the Manhattan JCC.

For the last 5 years, I have been exploring the relationship between Judaism, Jewish texts and movement through contemporary dance. I spent this past year studying these ancient texts and later commentaries in a full time intensive program. How can I take ownership of this corpus of infinitely rich literature and use it to flesh out my art and my life?

Dry Bones: Resurrection of the Living follows the personal journeys of three 21st century women striving to take ownership of inherited traditions. I’ve commissioned an unconventional rearrangement of Antonin Dvořák’s New World Symphony, a masterpiece that is full of stories about people on journeys. Reconciling inherited traditions with life in a diverse modern world is a challenge for all of us. By exploring text study and storytelling in the Jewish tradition, it is my hope that Dry Bones will spark dialogue among all people, no matter their affiliations - religious or otherwise.

In the Jewish tradition, the prophet Ezekiel is brought to a valley full of dry bones and prophecies over them to bring about their resurrection. He watches as the scattered bones are drawn together into skeletons, covered with flesh and skin, and filled with the breath of life. In that vein, can we look at the amelioration of our spiritual, emotional, intellectual and interpersonal lives as a process of gathering and re-invigoration?

This work is being created in collaboration with composer Cheryl Krugel-Lee and dancers Kate Ladenheim, Kendra Samson and Catherine Jaeger.  Over the next year, it is my goal to develop Dry Bones into an evening length work. For now, I am presenting Dry Bones as a 15-minute excerpt that can both stand on its own and as part of a larger work.

A danced re-imagining of the Pushkin story to the Prokofiev score played live by the Princeton Symphony Orchestra at Richardson Auditorium, Princeton University.  The work featured members of the Princeton Ballroom Dance and Glee Clubs, was directed by choreographer and Program in Dance professor Rebecca Lazier, and was reviewed by the New York Times.

Where this journey began... 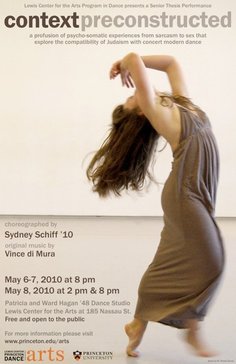